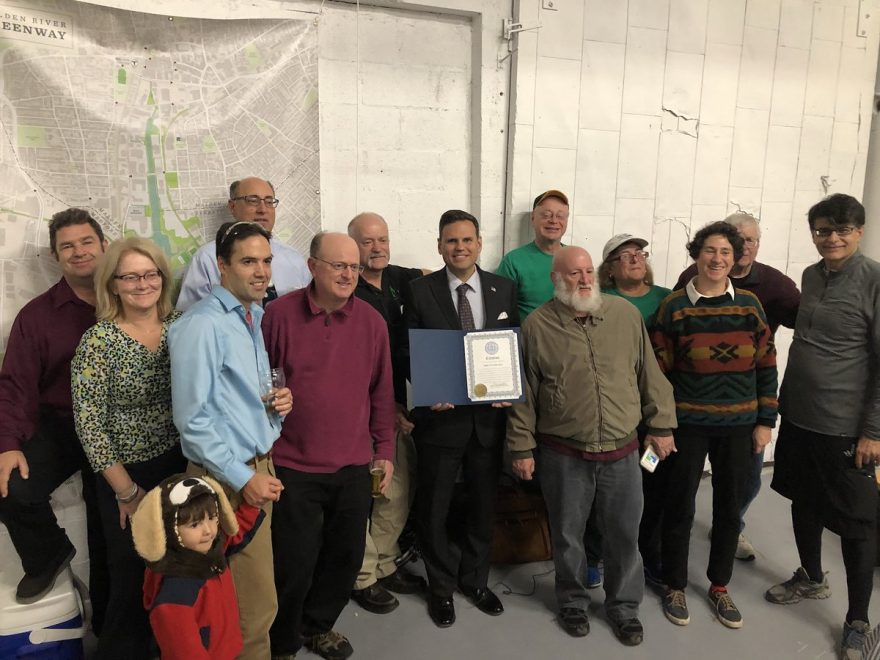 About 80 people attended Bike to the Sea, Inc.’s annual meeting at Down the Road Beer Company in Everett where Malden Mayor Gary Christenson presented board members with a certificate of appreciation.

Mayor Christenson congratulated the group on its 25th anniversary and also congratulated Bike to the Sea co-founder Steve Winslow on winning a seat on the Malden City Council earlier in the week. Craig Della Penna, a leader in the development of the Mass Central Rail Trail, was the keynote speaker. Bike to the Sea project manager, Clay Larsen, gave an update on progress being made in further developing the Northern Strand Trail.

(A video on the recent “Fall Colors Ride,” was shown at the annual meeting at Down the Road Beer Company in Everett. Click the gear icon above and choose 1080p to watch video in best quality)

“We are happy to be a sponsor for Bike to the Sea and join them in celebrating 25 years of trail development as one of our newest customers,” said Down the Road taproom manager Mellissa Conner. The brewery opened last week at 199 Ashland Street, in Everett.

25 Years of Work Finally Paying Off

For the past 25 years Bike to the Sea, Inc. has worked on creating the Northern Strand Community Trail, which now runs from Everett, through Malden, Revere, and Saugus and ends on the Lynn line. Plans are being made to continue the trail through Lynn and end at Nahant Beach.

A major focus of the group this past year has been to pave the one-mile Revere segment of trail, which is now covered in gravel. Once this is paved, riders from the North Shore will easily and safely pass under Route 1 on their way to Boston creating a truly regional bike trail on the scale of the popular Minuteman Bikeway that runs from Somerville to Bedford. For more information about this effort and to make a donation visit biketothesea.org.