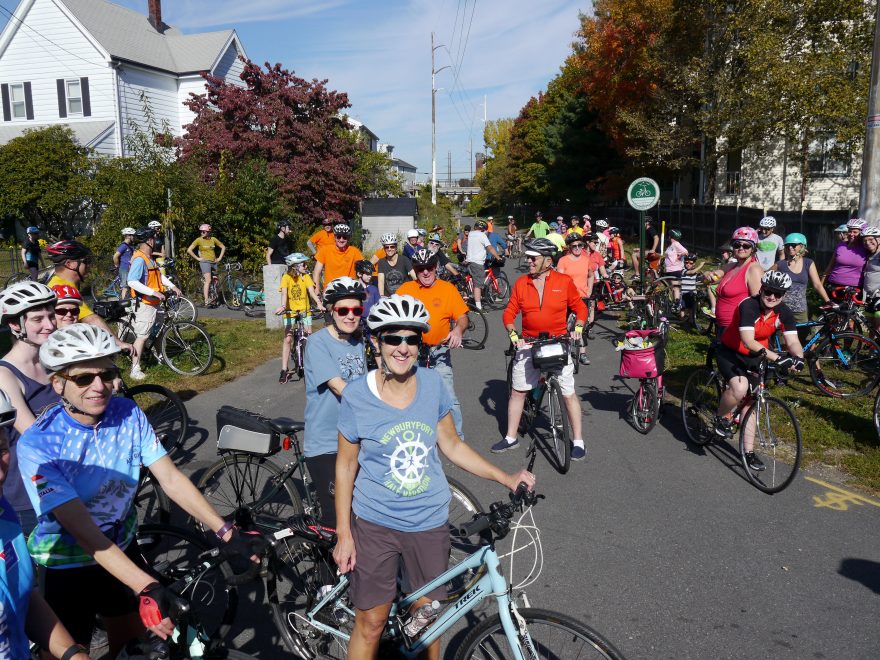 Bike to the Sea, Inc. Board Member

2017 marked a significant milestone for Bike to the Sea as it officially celebrated 25 years in its successful perseverance developing the Northern Strand Community Trail.

With the exisiting 7.5 miles of continuous trail continuing to grow in popularity through Everett, Malden, Revere and Saugus, new developments within Lynn helped advance trailbuilding efforts in that city. New and existing partnerships throughout all five communities continued to flourish as elected officials, localbusinesses and advocacy groups alike realized the untapped potential of healthy, non-motorized transportation in uniting people.

Memorable events this year included Bike to the Sea Day in June, with more than 120 riders of all ages taking part; as well as Bike to the Sea and Night Shift Brewing co-hosting the
annual Fall Colors Ride which drew nearly as many riders on a beautiful October morning.

In addition, for the first time ever, community groups from all five towns through which the Northern Strand travels cleaned up portions of the trail on the same day. More than 300 volunteers
participated in the April Earth Day cleanup, despite the rainy weather.

Bike to the Sea board members also stepped up public outreach to neighboring towns, generating sizable interest in Melrose by hosting a recruitment barbecue as well as promoting the organization at the annual Victorian Fair.

An ongoing study by the city via a grant from the Massachusetts Gaming Commission is
progressing; analyzing the best ways to bring the trail from its current terminus at West/ Wellington
Streets southward to the Mystic River adjacent to the Wynn Boston Harbor resort. In a separate
project, Wynn is also advancing the prospects of ultimately building a bike/pedestrian bridge over
the Mystic River that would connect the Northern Strand to Boston and Somerville paths.

The paved trail also continues to act as a catalyst for new partnerships with local advocacy groups.
One such productive initiative has involved Bike to the Sea and the Friends of the Malden River
teaming up with the Mystic River Watershed Authority and the Solomon Foundation in creating the
blueprint for the future Malden River Greenway. This effort – stretching through Everett, Malden and Medford – resulted with new plans and suggestions unveiled in the fall, and are now in place
headed into 2018.

Also implementing significant changes this year, the city’s Complete Streets Task Force drafted its first-ever prioritization plan, which was later accepted by MassDOT, potentially providing up to $400,000 in future funding for upgrades to bicycle, pedestrian and transit improvements including safer and better connections to the trail.

At Bike to the Sea’s annual meeting held in November, Malden Mayor Gary Christenson presented
board members with a certificate of appreciation in recognition of the group on its 25th anniversary
while also congratulating Bike to the Sea co-founder Steve Winslow on winning a much-coveted
seat on the Malden City Council.

Utilizing Recreational Trails Program grant funding awarded in 2016, Bike to the Sea in partnership
with the City and the Solomon Foundation was able to begin contract negotiations with a
consultant in order to advance 25 percent design for paving the one-mile segment of trail in North Revere. Due to its close proximity to Rumney Marsh, potential environmental impacts were taken into consideration in drafting up the scope of work for paving the trail there.

As part of an Indiegogo fundraiser, Bike to the Sea Inc. is working on behalf of the city of Revere to help raise funds for the final paving and construction project, with the goal of raising $250,000 by the Bike to the Sea Day Ride in June, 2018.

As a good omen of the artwork to come, the city enlisted various students in removing graffiti from the Route 1 underpass for future mural work.

Situated amid the picturesque backdrop of the Saugus River, Bike to the Sea launched an exciting
urban art project featuring trailside installations. The goal of this program is to link together the five
communities through which the trail travels into a linear outdoor art gallery. Art was prominently
display on the bridge crossing between Saugus and Lynn over the summer.

Planning also continued for major upgrades to the trail access point on Boston Street at the Lynn city line. Working with town plannners, upgrades will include a kiosk, benches, safety upgrades at the street crossing, boulder placement to prevent motorized vehicles from trail access, tree pruning and brush removal.

Finally, connections with the Northern Strand Community Trail and the recently approved
Saugus Riverwalk can now move closer to reality.

Bike to the Sea continues to strengthen existing partnerships with local public officials and neighborhood advocates in laying the necessary groundwork for future developments.

In anticipation of serving customers on bicycle and on foot, the recently-opened Market Basket included a shared use path from its facility to the future trail near Summer Street.

Stakeholders from the Mayor’s office, Bike to the Sea, the Solomon Foundation, One Community One Voice, the Lynn Food Project and Mass in Motion will all work together to complete the final segment connecting Saugus and Nahant Beach.

Tom McGee’s longtime support for the trail was in evidence at this past April’s Earth Day cleanup along the future linear park near Western Avenue. Congratulations mayor!