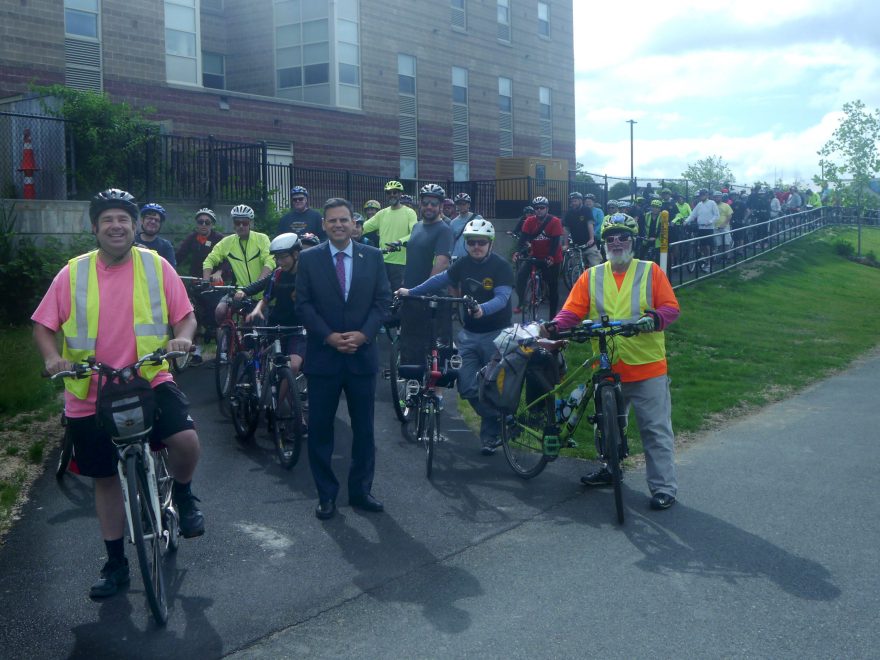 Partly sunny skies and temperatures in the 60s had some cyclists wearing jackets on the 26th Annual Bike to the Sea Day Ride on Sunday, June 3.

This year’s ride was the first time a mayor from one of the five towns of the Northern Strand Community Trail participated in the event.

Lynn Mayor Rides to the Sea

Sixty-two-year-old Lynn Mayor Thomas M. McGee rode the 12-mile route from Everett to Nahant Beach talking to constituents and greeting police officers who were stopping traffic to allow the nearly 100 riders to pass by on city streets in Lynn. Cyclists rode off-road on the Northern Strand Community Trail from Everett, through Malden, Revere and Saugus but then had to ride on streets in Lynn to get to the beach because that segment of trail has not yet been built.

The trail in Lynn is expected to be built within the next couple of years thanks to a $1.5 million state grant awarded earlier this year and the support of McGee, who was elected mayor last year.

“As the process is moving forward, we already have hired a consultant to help us develop a plan…” McGee told the Lynn Item.

Northern Strand is Part of a Much Bigger Project

The annual ride is designed to bring attention and support to efforts to complete the trail. Eventually the Northern Strand Trail will be part of the Eastcoast Greenway, a 3,000-mile biking and walking route linking the major cities of the Atlantic coast of the United States, from northern Maine, to Key West, Florida.

Already, there are plans to connect the Northern Strand Community Trail in Everett to off-rode bike trails that connect into Boston. When that happens, it may actually be quicker to travel from Lynn to Boston by bicycle than by car, especially during rush hours.