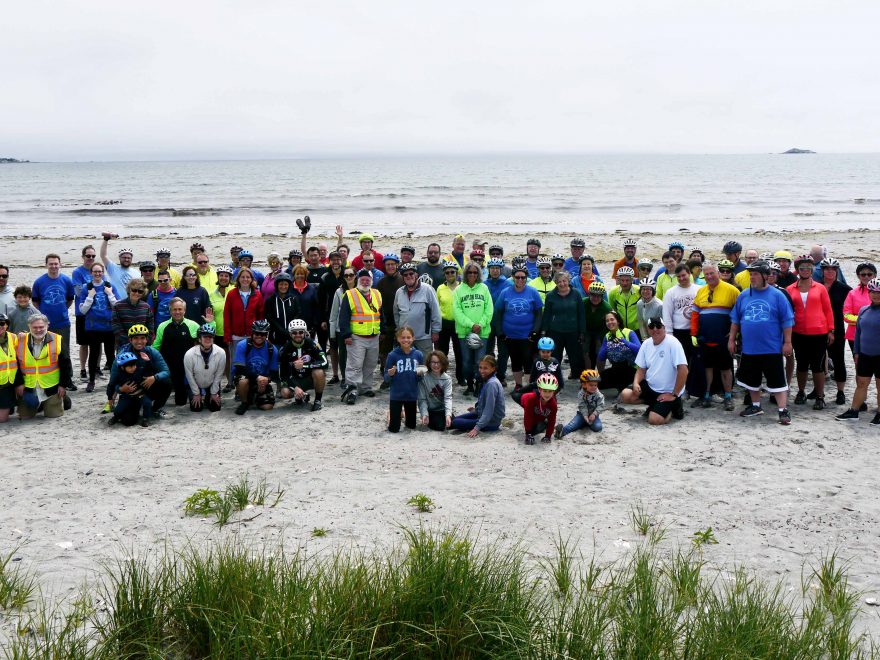 One of the largest groups ever participated in the 27th Annual Bike to the Sea Day Ride on Sunday, June 2.

About 103 bicyclists pedaled the 20-mile route from Everett to Nahant Beach, and then back to Malden, under mostly cloudy skies.

This year’s ride was special as the family of former Bike to the Sea Board Member Bob Shaw rode in his honor and led the group from the Saugus line to Nahant Beach. Bob Shaw lived in Everett and passed away in December, 2017.

The ride followed the Northern Strand Community Trail, built through the efforts of Bike to the Sea Inc. over the past 27 years. The trail starts in Everett and travels along a former railroad line through Malden, Revere, Saugus and Revere before ending in Saugus on the Lynn line. There are plans to complete the trail through Lynn and to Nahant Beach within the next couple of years.

Participants in this year’s ride mostly came from nearby cities in towns including Medford, Malden, Everett, Melrose, Saugus, Revere, Lynn, Somerville, Arlington, and Andover. However there was at least one rider from as far away as Scituate on the South Shore.

Although many participated in the ride in previous years, for some this was their first time.

Riders took a break in Saugus near the Lynn line where Bike to the Sea provided bananas, water, and portable toilets.

Although it’s not recommended to have children under 8 ride themselves, many parents provide pedal power via bike trailers and child seats.

Most of the ride is done off-road with police and ride monitors blocking traffic at intersections. In Lynn, where the off-road trail has yet to be built, police escort the bicyclists to ensure their safety.

At Nahant Beach most cyclists took a break on shore but a few brave souls put their feet, or more, in the ocean.

The ride, which began at 9 a.m., ended at the Dockside in Malden at about 12:30 p.m. where riders got free pizza. Beer was an additional charge.

(Photos and text by Mark Micheli)