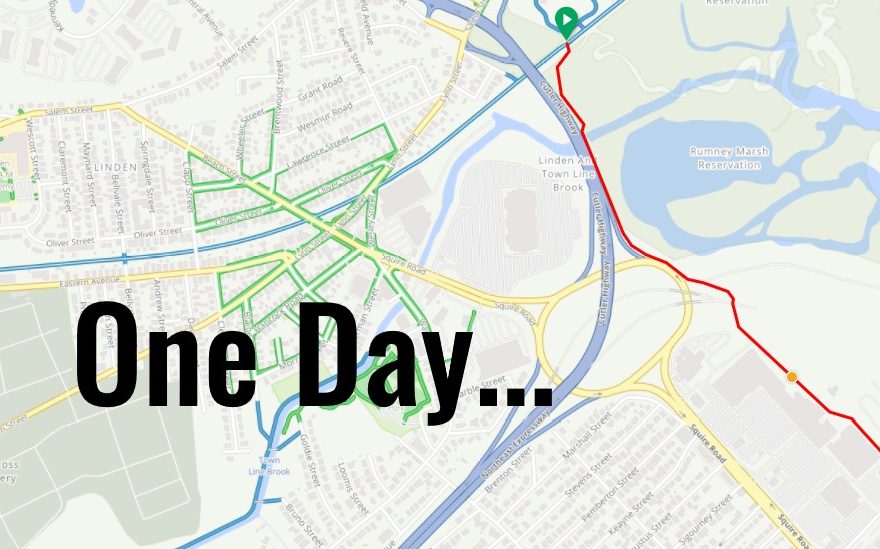 We’ve started putting efforts towards some new connector projects along various communities the Northern Strand abuts. When we increase our membership numbers and receive general donations, those funds are used to progress these projects, as well keep our community programming going!

Major roads and highways cut off most of Revere residents from accessing the Northern Strand easily or safely by foot and bicycle. We’re leading the charge to build a natural foot path that goes along the marsh towards Charger St. in downtown Revere. From there more connections could be added to other parks in Revere, including Nicholas Nino DiSalvo Park and multiple areas of the beautiful Rumney Marsh.

This potential route is mostly on “quiet roads” but is currently not possible because of a missing link between Rumney Marsh Terrace and Saugus Ave. Currently that segment is a wooded area, but we think it would be great to make it a natural wooded path. It would make the journey from the Northern Strand to the Rumney Marsh Restoration path much safer, flatter, and enjoyable for everybody, as well as provide a nice place for residents to go on walks and enjoy the marsh from.

We are fully in support of this project, headed by Malden City Councilmember Ryan O’Malley. Having a safe way to walk and bike from the Pine Banks and Oak Grove to downtown Malden and connecting to the Northern Strand is essential for Malden and Melrose residents to safely commute in and out of the city.

There’s a really neat unofficial dirt trail along a town canal in between Malden and Revere. We are currently discussing possibilities with the town of Revere to create a formal park trail that leads to Griswold Park as well as a signed connection from the Northern Strand.

Willow St. in Malden is a very wide street that goes by 3 parks near the Northern Strand. We’re leading a Complete Streets initiative to build a raised and separated bike path on the street, so that kids in the neighborhood can ride their bicycles to each park and get to the Northern Strand and Salemwood School safely.

The Wellington Connector will give a whole neighborhood in East Medford a safer way to get across Fellsway by foot and bike. And one day foot bridges can be built, to extend towards River’s Edge and the Northern Strand. The first step in this project is advocating for the city of Medford or the State of MA to purchase the land from PanAm Rail.

We advocate for a formal off-street connection between East Boston and Everett. Many of these segments, like the Chelsea Greenway, are already complete, and other segments are “pending projects,” but our presence will hopefully expedite the process!