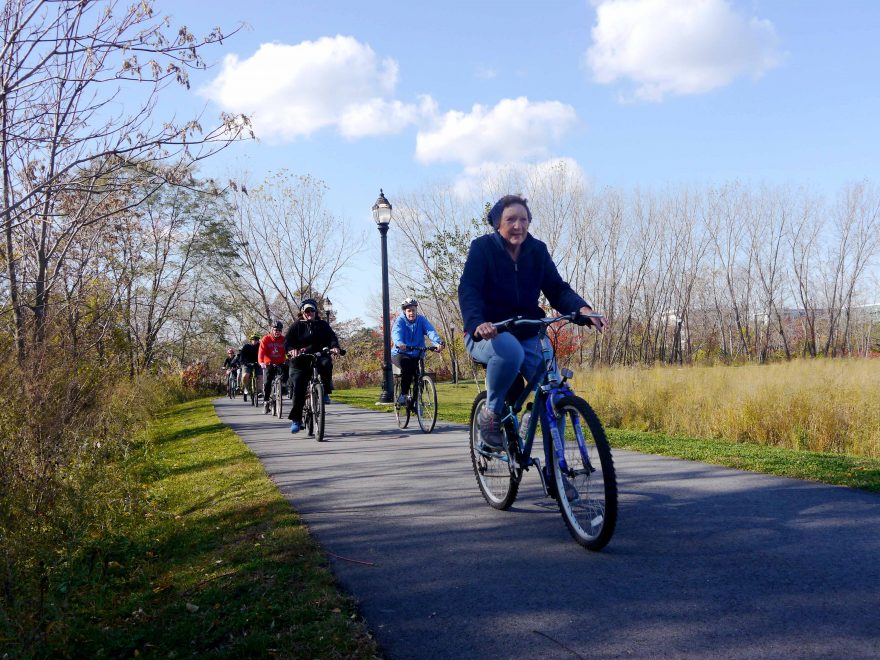 By Peter Sutton, Bike to the Sea Board Member

Looking back, 2019 will be remembered largely as a year of transition for Bike to the Sea. First, and foremost was the actual Northern Strand Community Trail project itself – transitioning from design concept to a full-fledged commitment to build.

Following a lengthy environmental permitting process that took up nearly the entire summer, an agreement between the five communities was signed in the fall putting the city of Revere in charge of overseeing future construction along the entire 10 mile trail length through Everett, Malden, Revere, Saugus and Lynn. Secondly, though no less significant was Bike to the Sea’s hiring of its first-ever executive director as the profile of the Northern Strand ramps up and B2C’s role in that growth becomes even more critical.

Following the departure of longtime project manager Clay Larson, Medford resident Yurij Lojko ably stepped up to the task of bringing B2C to the next level in terms of increasing membership, raising awareness and elevating the organization’s profile. Combining his background in on-line marketing with his years of trails advocacy on the local front, Yurij has proven an adept fit for the exciting challenges that lay ahead in completing the trail project while at the same time strengthening the existing partnerships with all five communities with the assistance of the B2C Board.

As the year drew to a close, details were finalized on selecting a construction firm in carrying out the full trail project. The Executive Office of Energy and Environmental Affairs, the Cities of Everett, Lynn, Malden, and Revere and the Town of Saugus were pleased to finalize the contract to construct the remaining sections of the Northern Strand and make improvements to those already existing having been awarded via a public bidding process. The name and exact dollar amount are being withheld pending a formal press release having been issued.

The construction process will begin with field work starting early in the New Year 2020, and full construction activities will commence in early spring. The construction work will be observed in the field by the Construction Management and Resident Engineering team of Stantec, with Construction Administration services being provided under the leadership of Brown Richardson + Rowe, who were, together with Stantec, hired by the Executive Office of Energy and Environmental Affairs to design and permit the Northern Strand on behalf of the five communities. Personnel from these firms will be present on the trail at all times throughout construction in order to advance this effort. The public will see construction crews and notice fencing and signage along the trail corridor during the construction process which may at times limit access. Temporary closure of the trail is possible as segments are fenced for safety and in order to accommodate the logistics of various work activities. The construction team will balance the need to ensure the public’s safety during heavy construction with the desire to maintain portions of the trail accessible for use.

The investment by Energy and Environmental Affairs to construct the Northern Strand recognizes the importance of this trail corridor to the five communities, and to the Commonwealth. Governor Baker and Lt. Gov. Polito recently established an Interagency Trails Team, which is led by the Governor’s office and is composed of staff from EEA, the Massachusetts Department of Transportation (MassDOT), and the Department of Conservation and Recreation (DCR). The purpose of the team is to help develop a unified vision for a trails network and translate that into strategic investments, policy innovations to facilitate development of trails, and shared partnerships with municipal partners. The Northern Strand Community Trail project is a direct result of the group’s “one team, one plan, one vision” approach to advance multi-use trails across the Commonwealth.

When completed the trail will provide a continuous off-road car-free corridor for transportation and recreation from the Mystic River to the Nahant shoreline, passing through and connecting the communities of Everett, Malden, Revere, Saugus, and Lynn.

In addition to these game-changing developments, other memorable events this year included our first-ever winter membership event at Sky Zone Trampoline in Everett, followed in the spring by our annual April Fools Ride through neighboring Winthrop that explored the seaside community’s growing trail network. B2C’s 25th anniversary was celebrated in raucous fashion with a 1950’s style Sock Hop in May while Bike to the Sea Day in June was also a huge hit, with over 100 cyclists of all ages taking part in B2C’s signature ride event; as well as B2C and Night Shift Brewing co-hosting the largest Fall Colors Ride yet in late October with nearly 100 riders!

Bike to the Sea board members also stepped up public outreach to neighboring towns, generating sizable interest in Melrose at the annual Victorian Fair in September and by promoting the organization at the 2019 Lydia Pinkham Open Studios extravaganza held this past November in Lynn.

In addition, B2C once again partnered with various community groups to host monthly clean-ups along the trail throughout the spring and fall. The before and after difference is truly remarkable, witnessed by countless trail users who now have one of the most pristine, well-kept and vibrant outdoor off-road networks in the country. We’re lucky to have such amazing volunteers to manage these cleanups – in particular Revere resident Sarah Sclafani who currently runs our cleanup program!

Finally, in November B2C’s annual year-end meeting at Demaino’s in Revere was notable for both its multi-faceted scope and reasons to celebrate: New B2C Executive Director Yurij Lojko outlined future initiatives in trail building and community building equally; while Executive Office of Energy and Environmental Affairs Kurt Gaertner was recognized with an award for his tireless efforts in making the completion of Northern Strand a reality. Rounding out the night was longtime member Mike Carter, presenting on his summer cycling sojourn to Montreal, while we raised funds for B2C and the unveiling of the first ever Bike to the Sea 2020 wall calendar which sold out of its first inaugural run!

As part of a prior agreement, current owners of the Gateway Mall have finalized work with the City and the developers of the adjacent casino to complete a key connection of the Northern Strand Trail.  All three parties came to a consensus on the optimal routing to bring the trail from its current terminus at West/ Wellington Streets southward to the Mystic River adjacent to the Encore Boston Harbor resort.  The latest design features for the Northern Strand extension through Everett can be found here. In a separate project, Encore is also advancing the design for building a bike/pedestrian bridge over the Mystic River that would connect the Northern Strand to Boston and Somerville paths. This year’s Fall Colors Ride highlighting trail connections through Everett, Medford and Somerville was once again co-sponsored by our friends at Night Shift Brewery and featured not one but two newly paved paths alongside the Malden River’s east bank: the first the newly christened Everett Riverwalk as part of the larger Rivergreen Development and a second underpass as part of the recently completed Route 16 Woods Memorial Bridge reconstruction project.

As Malden redevelops its downtown, safe connections to the Northern Strand continue at a steady clip. As part of MassDOT’s Complete Streets funding program, Malden received nearly $375,000 for traffic calming and intersection improvements. The five intersection and two corridor improvement projects will address safety concerns and access for pedestrians, bicyclists and transit users. One of the first projects recently completed was the Northern Strand crossing Main Street near the intersection of Charles Street. Trail users now have a wide striped crosswalk with a safe pedestrian refuge island midway across Main improving visibility and safety for all. B2C continues to closely monitor future developments along the proposed Malden River Greenway. This burgeoning effort – stretching through Everett, Malden and Medford – will form a critical connection between the Northern Strand and the Malden River. In major recent developments, outreach to develop a shared-vision for the waterfront park at the Malden DPW site was green-lighted. Steady progress also continues regarding plans for National Grid building and maintaining a 10-foot wide half-mile waterfront path along its property situated in Malden and Everett.

Potential environmental impacts were thoroughly vetted and successfully resolved in drafting up the scope of work for paving the future pathway. The most significant development was a revised design that now includes 93% of the trail with at least four feet of vegetated buffer to fragile wetlands. New trail-side sites such as the Harmon Street Playground firmly established their popularity in 2019, and it is hoped that a direct connection from the Northern Strand will become a reality in the near future.  The City’s Revere on the Move initiative continued to enlist various students and Lynn Raw Arts in graffiti removal from the Route 1 underpass and replacing it with revolving artwork installations.  The end of the year saw a renewed interest in B2C exploring future connections between the Northern Strand and Revere Beach – a no brainer!

Once again, our partners from the Saugus River Watershed Council partnered with B2C for our annual April spring clean-up event, provided tools and volunteers to create an urban oasis along the Northern Strand near the river estuary. Work also continues in the same location on Bianchi’s famous Revere Beach Pizzeria’s new location on the former site of O’Brien’s Irish Pub. Citing legitimate safety concerns, Citizens for a Safer Saugus continued to advocate for a town-wide speed limit of 25 miles per hour (unless otherwise posted lower), especially on streets that cross the Northern Strand at grade such as Essex, Denver and Central. Substantial upgrades in all street crossings were finalized by Stantec Engineering as part of the overall project this past year. Adding flashing signs, stop lights, and pedestrian lights are all expected to be deployed in several locations.

The City of Lynn experienced much attention in 2019 with three concurrent designs being advanced in the future development of the Northern Strand. The off-road (within the former rail corridor) portion of the trail through Lynn will run from Boston Street to Western Avenue. The second trail segment will then be extended eastward and re-branded as the Community Path of Lynn crossing Western Avenue and Summer Street ending just before Bennet Street. This section will be designed as a linear park for pedestrians and was the beneficiary of a $300,000 MassTrails grant – the maximum amount awarded– this past summer. The third and final leg of the project – extending the trail (via protected bike lanes) on local streets through downtown Lynn to the waterfront – also moved closer to reality and continued to generate much positive input in potentially transforming Lynn into a much more bike and pedestrian-friendly city.