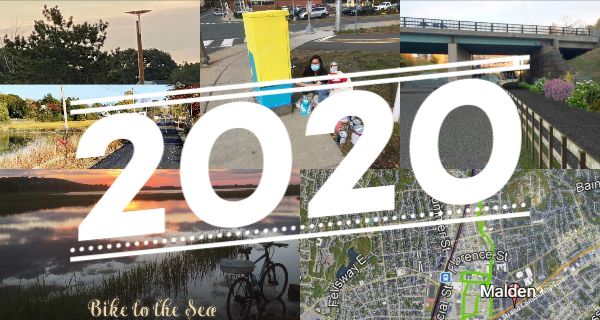 Looking back, 2020 will be remembered largely as the year the remainder of the Northern Strand Community Trail finally began construction. In April, work crews began removing old railroad tracks and ties in Lynn and proceeded southward through Saugus over the next 9 months. Despite some initial restrictions brought on by COVID-19 in March, work continued steadily through the spring and summer, culminating in a base course of asphalt down to Salem St in Revere by late fall. Hats off to the city of Revere who stepped up to the task of overseeing construction along the entire 10 mile trail length through Everett, Malden, Revere, Saugus and Lynn!

Secondly, though no less significant was Bike to the Sea’s skillful pivoting and subsequent adaptation to mostly on-line activities brought on by the pandemic. By necessity, all outdoor activities including group rides and clean-ups were postponed and instead members were encouraged to conduct their own individual trail-related activities. B2C heralded these solo clean-up endeavors through an online social media campaign (photo). Once warmer weather arrived, B2C encouraged members to lead small, socially distanced group rides, taking advantage of the relative safety of the outdoor open-air environment. To no one’s surprise, automatic counters installed along the trail near Charles Ro in Malden registered an explosion of trail use during the spring forced lockdown. During these troubled, isolating times, the Northern Strand proved invaluable as a resource that new and old users alike could turn to for walking, biking, safely socializing and most importantly, feeling a part of the community.

Led by executive director Yurij Lojko, Bike to the Sea adapted to the new normal by migrating its monthly board and member meetings online via ZOOM. Despite the limitations and challenges virtual platforms can sometimes pose, B2C rose to the occasion and did not cancel a single scheduled meeting or event in this critical year of trail building. While we missed seeing our friends and members in person at our beloved hangout – the dockside in Malden, B2C kept communications and trail updates flowing while continuing to bring our organization to the next level in terms of increasing membership, raising awareness and elevating the Northern Strand’s profile.  Rather than cancel the year’s signature event – Bike to the Sea Day – a successful online happy hour instead took place with toasts, trail construction photos, a visual history by founder Steve Winslow capped with a rollicking round of Northern Strand trivia complete with prizes. Similarly, our annual November meeting was another well-attended on-line celebration marking the rapid progress of trail construction culminating with a “Where on the Trail?” photo contest with a 2021 Bike to the Sea calendar awarded to the winner. Speaking of calendars, many thanks to those who made the purchase and sold out our complete run for the second year in a row!

The construction process began with field work starting in early 2020 with full construction activities having commenced in early spring. The work continues to be overseen in the field by Stantec, with construction being handled by Zoppo and administration services being provided under the leadership of Brown Richardson + Rowe, who were, together with Stantec, hired by the Executive Office of Energy and Environmental Affairs to design and permit the Northern Strand on behalf of the five communities. Personnel from these firms were present on the trail at all times throughout construction in order to advance this effort. The public saw several work crews and noticed fencing and signage along the trail corridor which at times limited access. Temporary closures of the trail took place as segments were fenced for safety in order to accommodate the logistics of various work activities. The construction team successfully balanced the need to ensure the public’s safety during heavy construction with the desire to maintain portions of the trail accessible for use.

The investment by Energy and Environmental Affairs to construct the Northern Strand recognizes the importance of this trail corridor to the five communities, and to the Commonwealth. Governor Baker and Lt. Gov. Polito established an interagency MassTrails Team, which is led by the Governor’s office and is composed of staff from EEA, the Massachusetts Department of Transportation (MassDOT), and the Department of Conservation and Recreation (DCR). The purpose of the team is to help develop a unified vision for a trails network and translate that into strategic investments, policy innovations to facilitate development of trails, and shared partnerships with municipal partners. The Northern Strand Community Trail project is a direct result of the group’s “one team, one plan, one vision” approach to advance multi-use trails across the Commonwealth.

When completed the trail will provide a continuous off-road car-free corridor for transportation and recreation from the Mystic River to the Nahant shoreline, passing through and connecting the communities of Everett, Malden, Revere, Saugus, and Lynn. Bike to the Sea is also beginning to visualize future connections to the Northern Strand through several envisioned concepts here.

The City completed design and permitting on the latest segment which will extend the Northern Strand Trail further southward to the waterfront.  Construction, which is scheduled to begin in 2021 will bring the trail from its current terminus at West/ Wellington Streets southward to the Mystic River adjacent to the Encore Boston Harbor resort.  The latest design features for the Northern Strand extension through Everett can be found here. In a separate project, Everett DPW successfully completed its installation of overhead lighting along the trail making for a safer, more well-lit and inviting experience for its residents.

In August, a new 3.2-mile loop around the Malden River was unveiled and marked for cyclists, runners, and pedestrians to easily follow. The loop takes users down the off-road Northern Strand Community Trail and through the new Everett Riverwalk that features wildflowers, a soccer field, basketball courts, and access to the Malden River. It then follows Air Force Road and Norman Street to the Route 16 bridge which connects to a lush new park on the Medford and Malden side of the river. The loop is well marked with stencil markings on the ground and signage. The loop was dedicated to former Malden Clerk Magistrate Joseph Croken and Malden High School track star Louise Stokes, who, in 1932, was one of the first African American women to qualify for an Olympic team. She ran track and field. B2C also continues to closely monitor developments along the proposed Malden River Greenway. This burgeoning effort – stretching through Everett, Malden and Medford – will form a critical connection between the Northern Strand and the Malden River. Finally, the first segment of the Spot Pond Brook Greenway opened over the summer and is envisioned to connect Oak Grove to the Northern Strand via downtown Malden.

The end of the year saw a renewed interest in B2C exploring future connections between the Northern Strand the rest of Revere. B2C brainstormed ideas into a formal submission of a MassTrails grant – studying the feasibility of a trail connection through Rumney Marsh and the Northgate shopping center down Charger St to local playgrounds.  The Revere section of the Northern Strand has now been surveyed and prepped for paving scheduled for spring of 2021.

In the fall, the base course of asphalt was laid on the entire Saugus stretch making for a welcome addition to an already well-used section of the Northern Strand. Safety upgrades on streets that cross the Northern Strand at grade such as Essex, Denver and Central also were undertaken. Also completed recently was the installation of wood rail fence at Cottage St and Central St. The bridge crossing over the Saugus River was delivered via prefabricated sections in December and is scheduled to be installed in spring 2021.

The City of Lynn experienced the most attention in 2020 with three concurrent projects being advanced in the future development of the Northern Strand. The first trail segment to open this fall was the Community Path of Lynn – crossing Western Avenue and Summer Street, ending just before Bennet Street. This section was designed as a linear park for pedestrians and proved to be an immediate hit with neighbors. The off-road (within the former rail corridor) portion of the trail through Lynn was also constructed from Boston Street to Western Avenue. While the two smaller bridges overlooking the Lynn Marsh remain off-limits, much of the rest of the Northern Strand is now open for use. Only the linear park section between Cottage St and Spencer St remain closed as work is finalized on the raised planting beds and playground equipment.  The third and final leg of the project – extending the trail (via protected bike lanes) on local streets through downtown Lynn to the waterfront – also moved into design phase and is anticipated to become a future MassDOT-funded project. All three project segments continued to generate much positive input in transforming Lynn into a much more bike and pedestrian-friendly city.