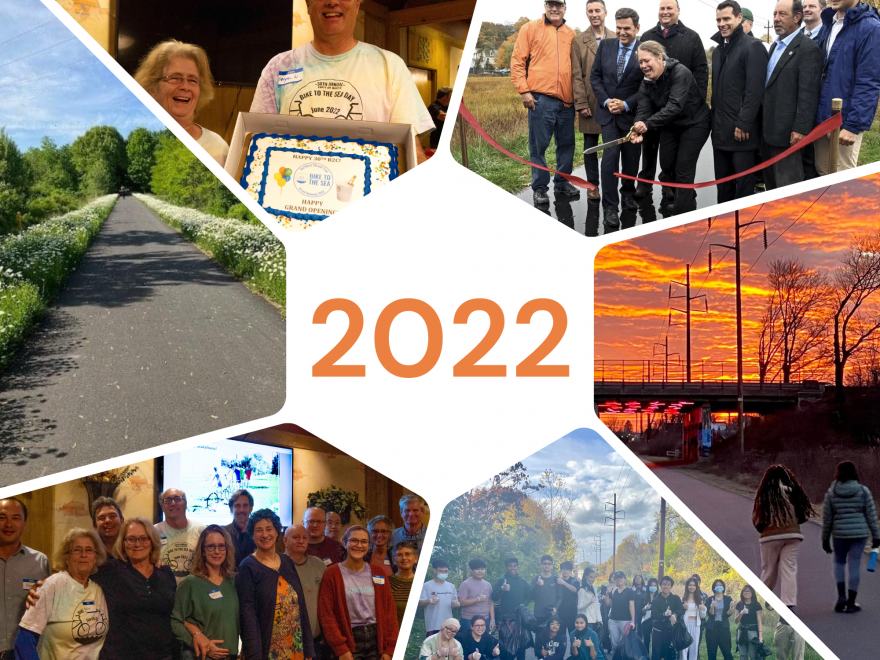 With trail construction completed in 2021, this past year Bike to the Sea focused on making meaningful connections – not only to important destinations but to new community members across all five cities and towns spanning the Northern Strand Trail. The completion of the NST has been nothing short of transformational, with thousands of new and existing users discovering (and rediscovering) the benefits of this completed 11.5-mile shared use path as a critical link for transportation, recreation and conservation. B2C’s three “pillars of action” were also formally established in 2022:

Looking back, 2022 will be remembered fondly as the year the full benefits of a completed shared use path were finally realized on the Northern Strand Trail.  Finishing touches -sometimes known as “punchlist” items – were completed, including neighborhood connections via new sidewalks leading from the trail, edging, planting and invasive species removal, as well as signage and interpretive art installations making for an enhanced experience for all path users. Especially welcome were the adaptive reuse of old rails and ties at many trailheads, as well as the full-size bocce ball court installed in Revere that saw plenty of action from locals! Despite some minor disruptions brought on by supply-chain issues, work continued steadily through mid-2022, culminating in the completion of multi-colored painted crosswalks. A special shout-out goes to the city of Revere who proved more than capable in overseeing construction along the entire 11.5-mile trail length through Everett, Malden, Revere, Saugus and Lynn!

During the first half of the year, Bike to the Sea continued to adapt to mostly on-line activities brought on by the pandemic. However, as spring gave way to summer and COVID restrictions eased, it became possible to resume rides, trail clean-ups, flower plantings and other trail-related activities. April saw the return of spring and with it our annual April Fool’s Ride. In June, the annual Bike to the Sea Day returned in a big way, with over 200 riders and a ceremonial ribbon-cutting to mark the event. In July, the annual B2C Sand Sculpture Ride to Revere Beach took place, followed in October by a triumphant Fall Colors Ride with 75 riders taking part! In addition to these bedrock events, new rides were introduced for maximum inclusion regarding the community’s diverse residents: tri-lingual (English, Spanish and Portuguese) family friendly rides co-sponsored by Cambridge Health Alliance as well as the second annual Malden Chinese Culture Connection “Bike to the Moon” ride resulted in dozens of new memberships and increased awareness. Equally important were B2C-led rides into Boston as an alternative to the Orange Line shutdown in late summer.

Emerging finally from these troubled, uncertain times, the Northern Strand continued to prove invaluable as a recreational resource that new and old users alike could turn to for walking, biking, safely socializing and most importantly, becoming part of the community. Led by the stellar efforts of Executive Director Jonah Chiarenza, Bike to the Sea rotated its monthly board and member meetings in-person and online via ZOOM during 2022. Throughout the year, B2C was able to resume some member meetings in person at 3 Amigos and Floramo’s in Malden, as well as hosting trivia nights at Aeronaut Cannery in Everett, providing a mutual lift for attendees and the businesses alike. B2C kept communications and trail updates flowing while continuing to bring our organization to the next level in terms of increasing membership, raising awareness and elevating the Northern Strand’s profile. A direct result of this increased outreach were feature stories on WBZ radio, the Lynn Item, and the Boston Globe.

To mark the formal completion of all trail work, a ribbon-cutting event took place in October, hosted by trail funders and champions Executive Office of Energy and Environmental Affairs and the Solomon Foundation. Many elected officials, state and local agency stakeholders as well as several Bike to the Sea members braved torrential rains to mark this momentous occasion near the red bridge in Saugus. Finally, our annual November meeting was another well-attended in-person celebration, held a stone’s throw from the trail in Malden with our old friends at Pearl Street Station. Rounding out this eventful year, it was only fitting our guest speaker was none other than esteemed Rails to Trails Conservancy President Ryan Chao – making time from his busy schedule to celebrate the Northern Strand’s completion and Bike to the Sea’s 30th anniversary before heading back to Washington DC!

Bike to the Sea was excited to announce the hiring of Agnes Recato as our new part-time Program Manager. Agnes brings a wealth of personal and professional experience to our organization, including:

Together, Agnes and Bike to the Sea will continue to:

Upon completion, the NST will provide a continuous off-road car-free corridor for transportation and recreation from the Mystic River to the Nahant shoreline, passing through and connecting the communities of Everett, Malden, Revere, Saugus, and Lynn. In 2023, Bike to the Sea will continue to advance future connections to the Northern Strand from Saugus Iron Works and Revere Beach, in addition to several envisioned concepts here. Expect a ribbon cutting event in Everett during the spring as the final segment under Route 16 is completed!

The City of Everett resumed work on the latest segment which will extend the Northern Strand Trail further southward to the waterfront.  For much of 2022, work was delayed due to unforeseen repairs needed on the highway superstructure above the trail. Construction, which is scheduled to be completed in spring 2023 will bring the trail from its current terminus at West/ Wellington Streets southward under Route 16 to the Mystic River adjacent to the Encore Boston Harbor resort.  The latest design features for the Northern Strand extension through Everett can be found here. This extension will eventually connect with the future Mystic River Crossing bridge, which is funded for construction beginning in 2024. In a separate project, Everett DPW continues to plan on expanding waterfront access along the Malden River with the addition of boardwalks, new recreational areas and boat launches.

An idea B2C has been mulling for over a year finally took shape in the form of an official proposal to open its own “bike kitchen” in Malden. The Canal St location – adjacent to the trail near Hoff’s Bakery – is envisioned to be a one-stop shop for cyclists needing quick repairs, maintenance advice and a meet-up place for Bike to the Sea members. B2C is working with the City, Payette Architects and Wayside Trailer to design a retrofitted shipping container to host these DIY bike repair clinics and our volunteer bike fix-it activities. Read more about our recent Pop Up Repair Shop in this blog post during which volunteers fixed up bikes that B2C is donating to folks who need some wheels. We’ll be looking for members to help make this dream happen, especially if you are handy with a wrench and want to help out, or have bicycles to donate.

Significant safety upgrades were also at the forefront for Route 99 through a public input process championed by B2C. Reimaging Broadway virtual public meetings brainstormed ways to redevelop Broadway into a complete street to serve all transportation needs and modes from the Melrose line to the Everett line. B2C also continued to closely monitor developments along the proposed Malden River Greenway. Recently awarded $1.3 million in funding will be used to transform Malden’s Department of Public Works yard on the Malden River to incorporate a public, climate-resilient riverfront park. It will reduce the City’s climate vulnerability by building green stormwater infrastructure to reduce surface flood risk, increasing the tree canopy by planting over 200 new trees to mitigate urban heat island effects, restoring the natural riverfront landscape, and building an elevated greenway path to serve as a flood barrier in the event of sea-level rise. Finally, the Spot Pond Brook Greenway advanced into MassDOT’s project universe by receiving its official project number, which will solidify construction funding for future phases. The greenway is envisioned to connect Oak Grove to the Northern Strand via downtown Malden.

The beginning of the year saw a renewed interest in B2C exploring future connections between the Northern Strand and unquestionably the City’s greatest natural resource – Revere Beach. In the spring, B2C board members – in partnership with the Solomon Foundation and the City of Revere – retained the services of a design consultant to advance a feasibility study in 2023 that will examine the best and safest routing between the trail and Revere Beach. Work in progress thus far includes an existing conditions study of potential routes between Linden Square in Malden and the beach; potential upgrades to Malden St in the form of a shared use path and adaptive reuse of underutilized pedestrian bridges over Town Line Brook connecting to existing playgrounds and other public-owned lands.

Click here for the project update presentation from Kittelson & Associates

A new scenic overlook along the Saugus River now offers stellar panoramic views and ample bird sighting opportunities. It also provided a fitting backdrop for the official opening of the trail with a ceremonial ribbon-cutting in late October. “Safe and fun access to the outdoors is a priority of the Baker-Polito Administration, and I am pleased that this project provides residents with great opportunity to get some exercise and enjoy the Commonwealth’s natural resources,” said Energy and Environmental Affairs (EEA) Secretary Beth Card. “Significantly, rail trails like the Northern Strand Trail also provide commuters with the option to leave their cars behind, which reduce the release of harmful carbon emissions and assists in the Commonwealth’s efforts to achieve Net Zero in 2050.” The construction of the Northern Strand was supported by the work of the Interagency MassTrails Team, which is composed of staff from EEA, MassDOT, and the Department of Conservation and Recreation (DCR). In 2023, B2C hopes to collaborate with partners at DCR and the Solomon Foundation to repurpose the former construction staging area into new parkland in the coming years. Planning also continues with the Town of Saugus on improving lighting along portions of the trail, as well as connections between the NST and Saugus Iron Works and the future Riverwalk.

The third and final leg of the NST – extending the trail (via protected bike lanes) on local streets through downtown Lynn to the waterfront advanced ever closer to becoming reality. Thanks to the support of B2C and our many partners and advocates, MassDOT announced a funding commitment for a continuation of the Northern Strand Trail as an off-street, separated two-way bike lane from Western Ave in Lynn to the Nahant Rotary. The $10 million project was added to the State Transportation Improvement Program and construction is slated to begin in fall 2023! Plans to road diet the Lynnway also took a step forward with a $20 million Federal RAISE grant award, with the completed project connecting the NST with a new shared use path. Lynn officials are also actively redeveloping their waterfront into the future Harbor Park, which would also realize additional trail connections. All projects – completed and planned – continued to generate much positive input in transforming Lynn into a destination bike and pedestrian-friendly city.