Bike to the Sea connects communities by building and improving shared-use paths, and promoting safe and happy trail use for all ages and abilities.

One of the first bicycle trips made in the 1890’s by the Malden Bicycle Club was to Revere Beach. 100 years later Bike to the Sea continues the tradition, but has extended its mission to provide a shared-use space for all types of activities. Founded in 1993, Bike to the Sea, Inc. (B2C) is a charitable, non-profit 501(c)(3) corporation that promotes bicycling and bicycle safety in communities north of Boston, including Medford, Everett, Malden, Revere, Saugus, and Lynn.

The Northern Strand Community Trail runs along the former route of the Saugus Branch Railroad, which operated passenger service from 1853 to 1958. Currently the trail begins along the Malden River in Everett near the proposed TeleCom City where it will one day connect all the way to Assembly Row in Somerville. Heading north to Malden, then east, the trail travels past the locations of the old Maplewood and Linden rail stations to the spectacular vistas of Rumney Marsh in North Revere. Local families will be able to pedal to the Saugus Ironworks or the Saugus River and then to a pathway along the Lynn Waterfront that will connect to Nahant and Revere Beaches. 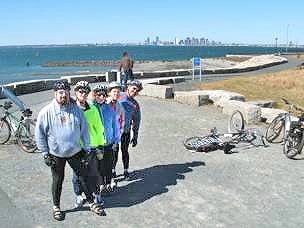 Comprised of over 100 members, B2C holds regular social and pleasure rides to destinations such as Revere Beach, Nahant and Marblehead Neck. The largest ride of the year is “Bike to the Sea” held at the end of June. Over 100 families and friends join us for a ride to the beach escorted by local bicycle police. Funds raised at B2C Day have been donated to develop a prelimiary design and cost estimate for the bicycle trail and an aerial survey. B2C volunteers regularly participate in local bicycle fairs helb by the schools, Junior Police and the Kiwanis. Members also promote safer streets for bicyclists, better parking at MBTA stations and bicycle commuting to Boston. B2C works with MassBike, Rails to Trails and East Coast Greenway.

For more Information about Bike to the Sea, email news@biketothesea.org or sign up for our newsletter:

END_OF_DOCUMENT_TOKEN_TO_BE_REPLACED

Construction for the remainder of the trail has begun in Lynn and Saugus!

Donations Via Your Amazon Purchases

Shop on Amazon using this link and the company will donate .5 percent of the purchase price to Bike to the Sea. For more information check out this FAQ page. And don’t forget to share this link with family and friends.

Check out an interactive Google map of the trail.

Check out an interactive map of this rail trail that includes links to historic photos of railroad stations.

Take a look at the work Bike to the Sea did in 2019 as well as in previous years.

Trail Closure Alert: Bridge 1 in Saugus is under active construction. That means people can't use the Northern Strand to get from downtown Saugus to the Saugus/Lynn line until further notice.Temporary Recommended Detour
+