We’ve started putting efforts towards new connector projects along various communities the Northern Strand abuts, including Medford, Revere, and Malden. These projects all allow residents in their communities to reach more transportation and recreation options in their neighborhoods by foot or wheels. Read more

2018 marked a milestone for Bike to the Sea (B2C) as it celebrated 25 years in existence with the most significant development to date towards completing the Northern Strand Community Trail. Read more

Design work on the trail, including building out the last leg through Lynn, is underway thanks to the state’s $1.5 million award. Meetings will be held in each of the five towns to get public opinions on the design and construction. Read more

2017 marked a significant milestone for Bike to the Sea as it officially celebrated 25 years in its successful perseverance developing the Northern Strand Community Trail.

With the exisiting 7.5 miles of continuous trail continuing to grow in popularity through Everett, Malden, Revere and Saugus, new developments within Lynn helped advance trailbuilding efforts in that city. New and existing partnerships throughout all five communities continued to flourish as elected officials, local businesses and advocacy groups alike realized the untapped potential of healthy, non-motorized transportation in uniting people. Read more

From new funding sources and partnerships to several high-profile events, 2016 marked another banner year for Bike to the Sea and the Northern Strand Community Trail (NSCT). 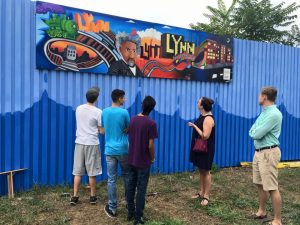 With the existing 7.5 miles of continuous trail now open through Everett, Malden, Revere and Saugus, steady progress was made with the city of Lynn in developing the final section there.  In September, the first annual Community Day Bash opened the first path section in Lynn with an unveiling of a large mural, designed and painted by teens at Raw Art Works. Read More 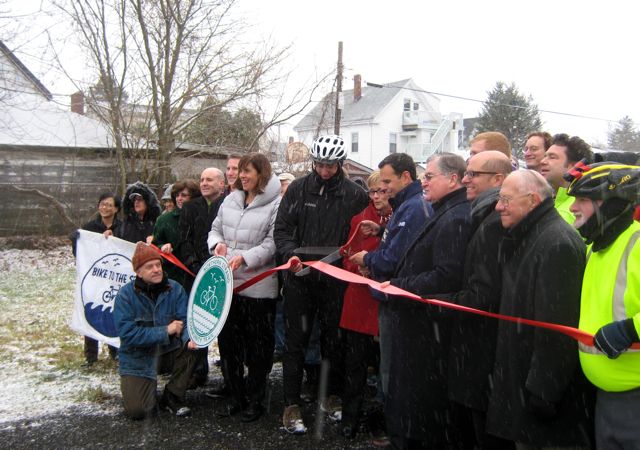 Malden officials made it official at a ribbon cutting ceremony near Linden Square on Saturday, Dec. 1. The Malden portion of the Northern Strand Trail is officially open.

Check out the video (of the Malden portion of the trail):

The money will go towards developing the trail through Revere. The eBay Foundation considered several applications before choosing Bike to the Sea to win the award.

Malden Soon To Have 3 Miles of Continuous Trail

The blocked section of trail near Maplewood in Malden will be opened up this fall (2012) so Malden will have a continuous three miles of trail.

Many thank to the Mayors office and the Malden Redevelopment Authority (MRA) for moving this critical issue forward and Beth Debski for her hard work on the trail!

“I am pleased to share some very exciting news with you about the Bike to the Sea trail. As you know, the MRA has been working closely with DEP and EPA to develop a plan to construct the trail through the contaminated parcel located behind Papa Gino’s at Maplewood Street. I was just informed that both DEP and EPA have approved the City’s construction plan for this area which will allow us to have 3 miles of a continuous trail through the City.

“Construction will begin next week and should be completed by the end of October. Work will include the placement of 12 inches of material over the existing tracks and the installation of fencing on both sides of the path. The path will be 12 feet wide in this area with 3 foot shoulders on either side of the path. I have authorized funding through the City’s Chapter 90 allocation. Once construction is complete, I will schedule a formal ribbon cutting ceremony to celebrate the completion of this long-awaited project.

“In the meantime, please feel free to share this news with your constituents and members of Bike to the Sea. Thank you to Beth Debski for staying on this issue since it was identified way back when.”

Bike to the Sea Project Manager Clay Larsen told the Lynn Item last month that he’s hoping to finish the 2 1/2-mile trail in Saugus in “about a month.”

The path starts at the Revere Line near Salem Street and goes past the Anna Parker Playground, past the Belmonte Middle School, through Central Street to Chute Brook and out to Boston Street.

Read more about the project in the Lynn Item.

Vietnamese
END_OF_DOCUMENT_TOKEN_TO_BE_REPLACED
Trail Construction Alert: Some parts of the trail in are still under construction.Trail Map Weekly Updates
+
Skip to content